New Carriage House is breaking ground at 1240 North New Jersey in The Old Northside, an historic neighborhood with an incredible mix of mostly historic with a few modern structures sprinkled-in.  For this project, the design-intent was to respect the original Victorian architecture and fit-in.  We are excited to see construction underway – please check back for updates and lessons we learn along the way!

Front of existing house has wood siding and details intact. 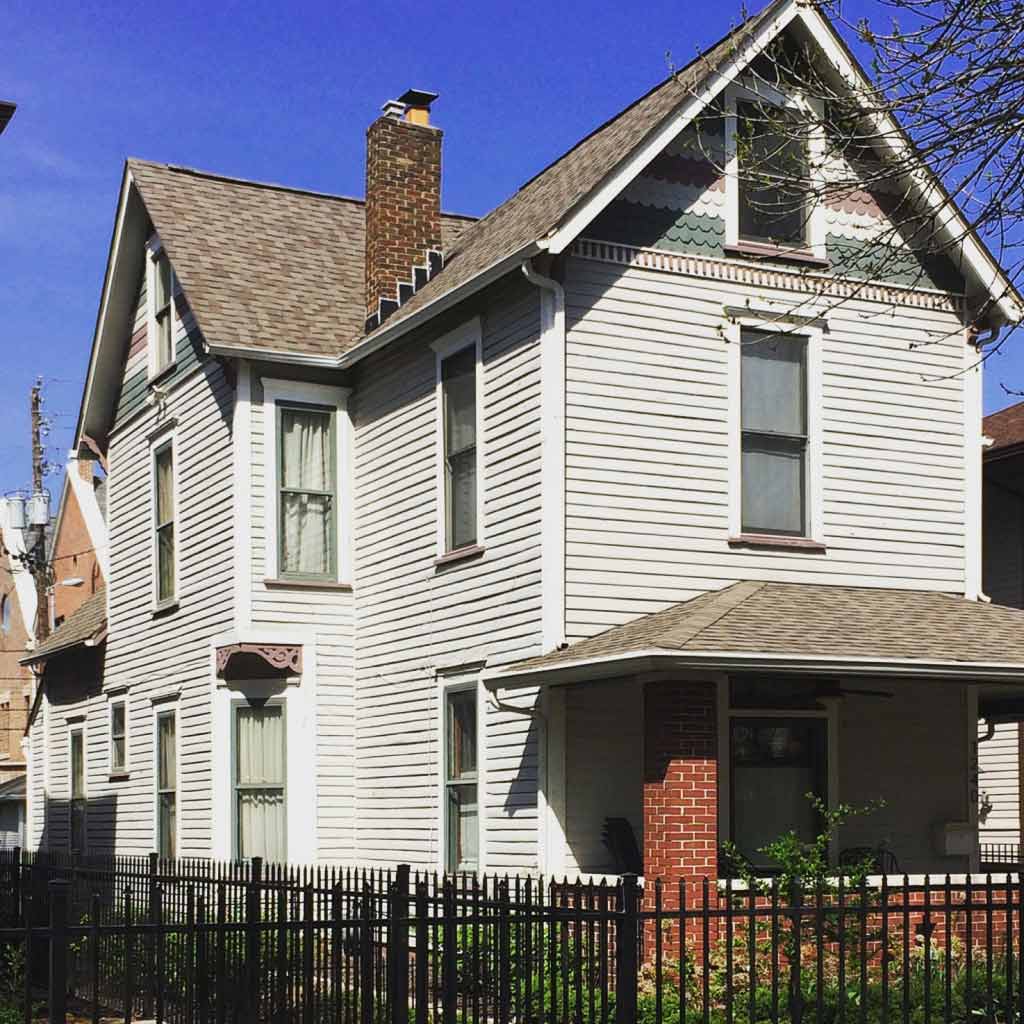 Backside has had an addition and alternative siding installed.  Over time, the Owner will restore the exterior to original materials and details. 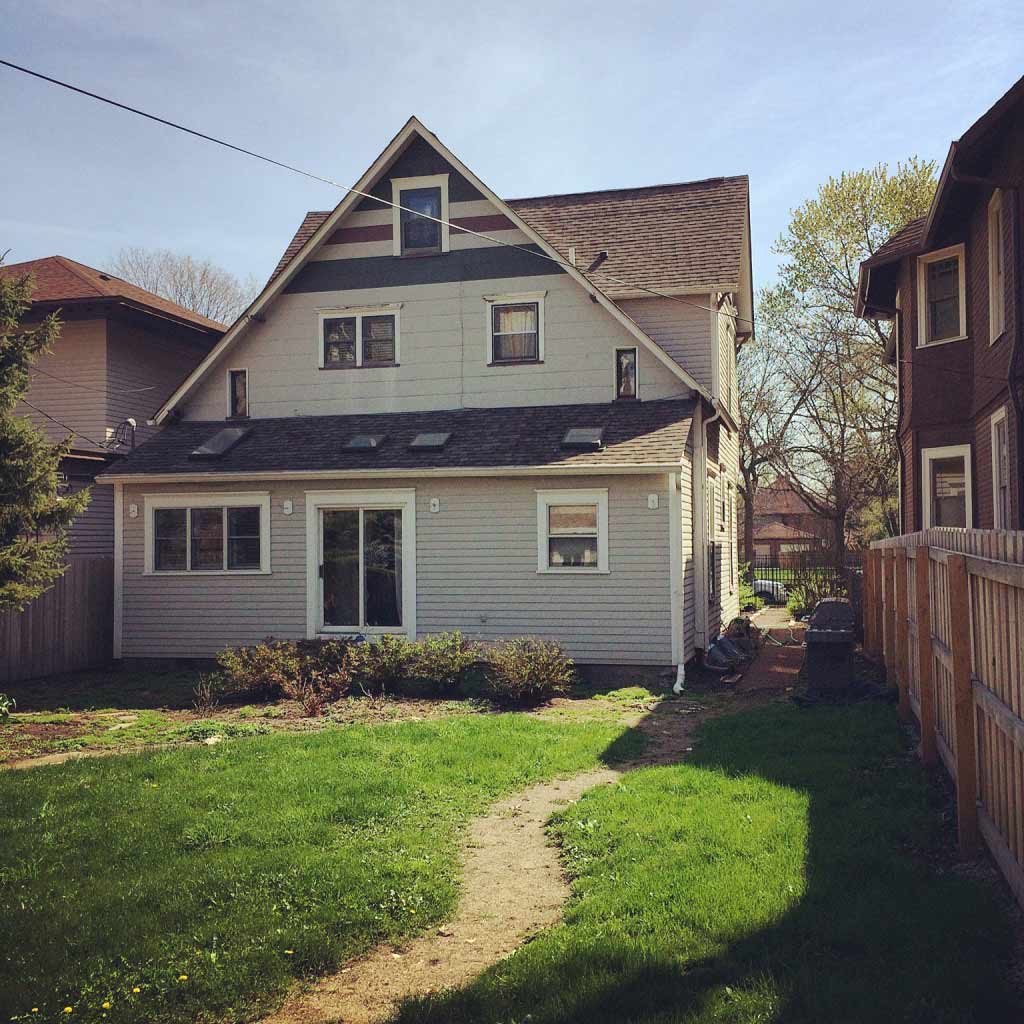 This small two-car garage was added at some point and likely is not original to the house.  We will be removing this guy in favor of a new two-level carriage house to include 3-car garage and fully-furnished upstairs loft apartment. 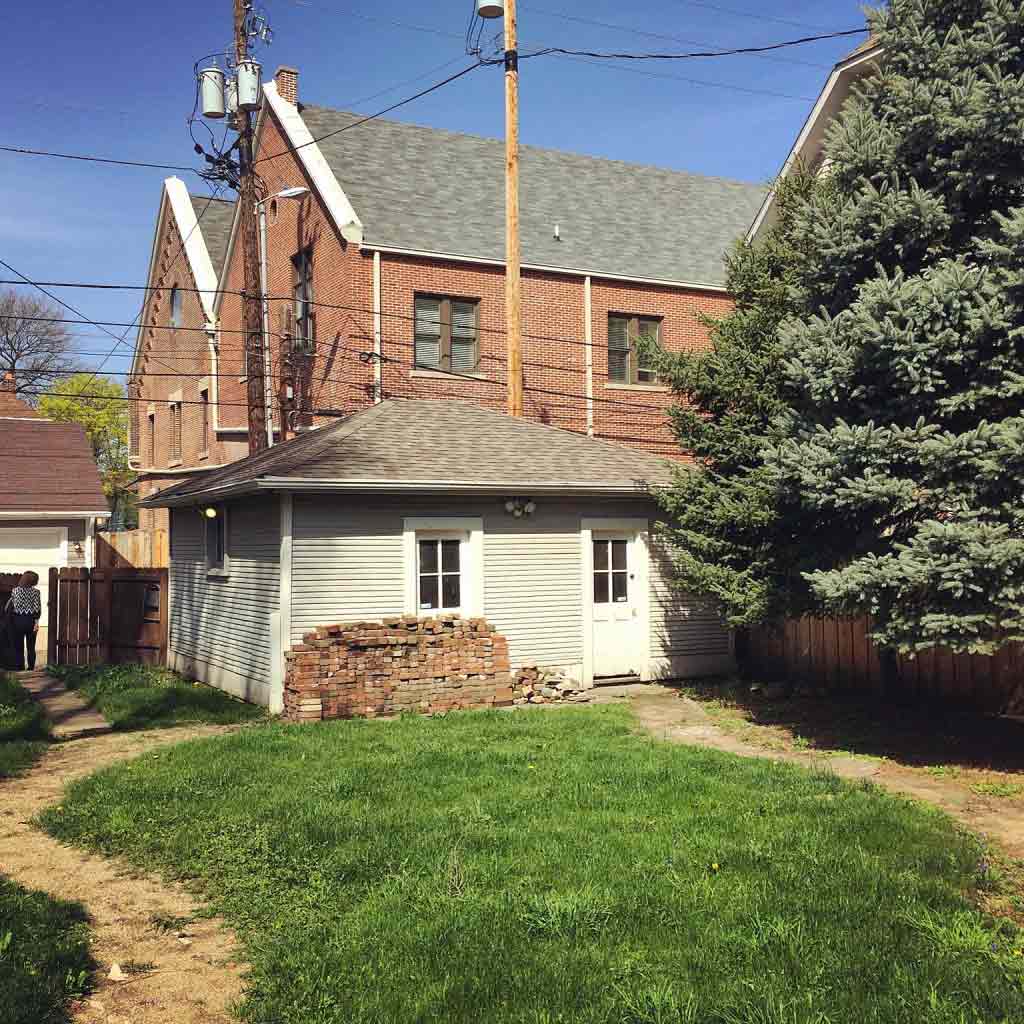 Summer 2015:  Most design work completed and approved by IHPC.  Owner put the construction on-hold for a season.  When construction did finally commence in late summer 2016, we provided the important 3D design images related to all the rafter, porch and bracket details to supplement the detailed set of construction documents. 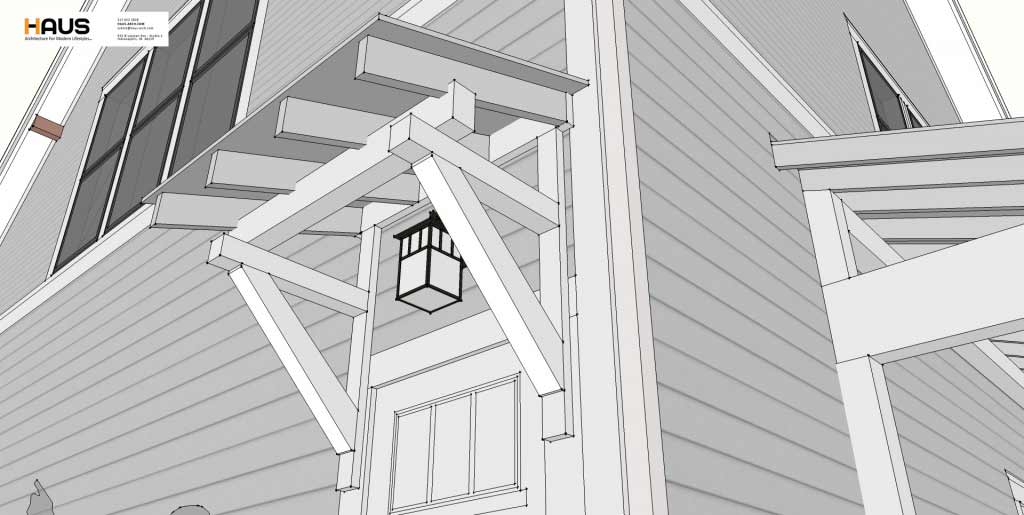 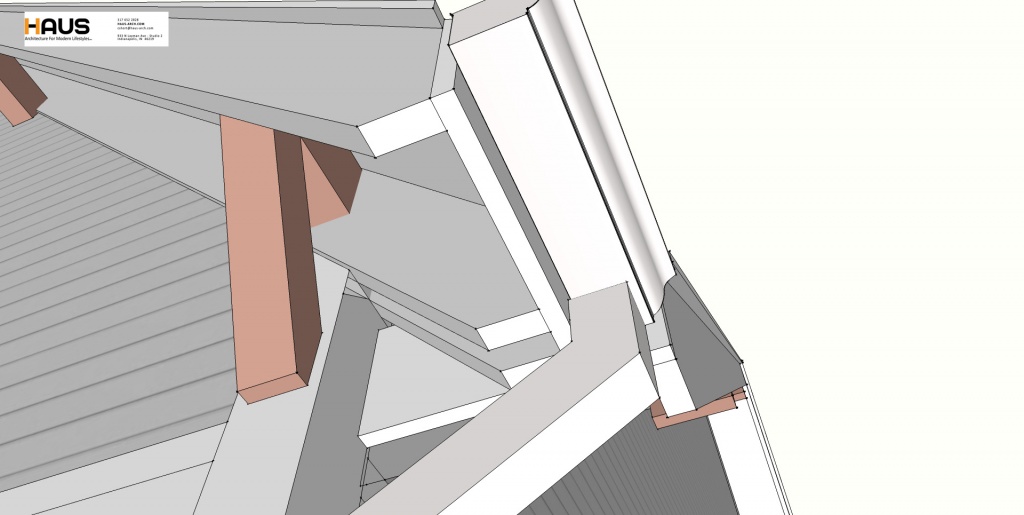 September 2016:  Having offered our Construction Management services to Owner along with pricing, Owner elected to hire another party to complete the construction work.  Images below show progress – Garage level and stair opening have been framed. 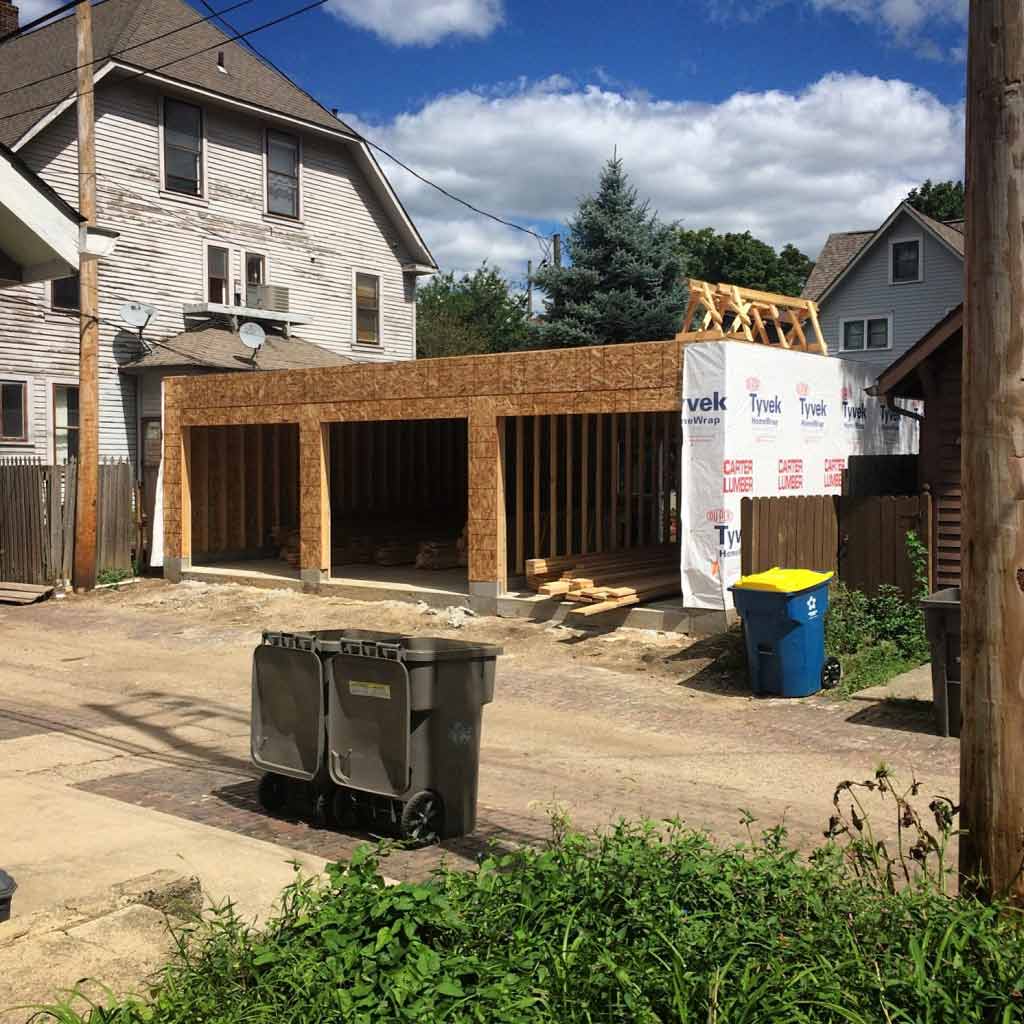 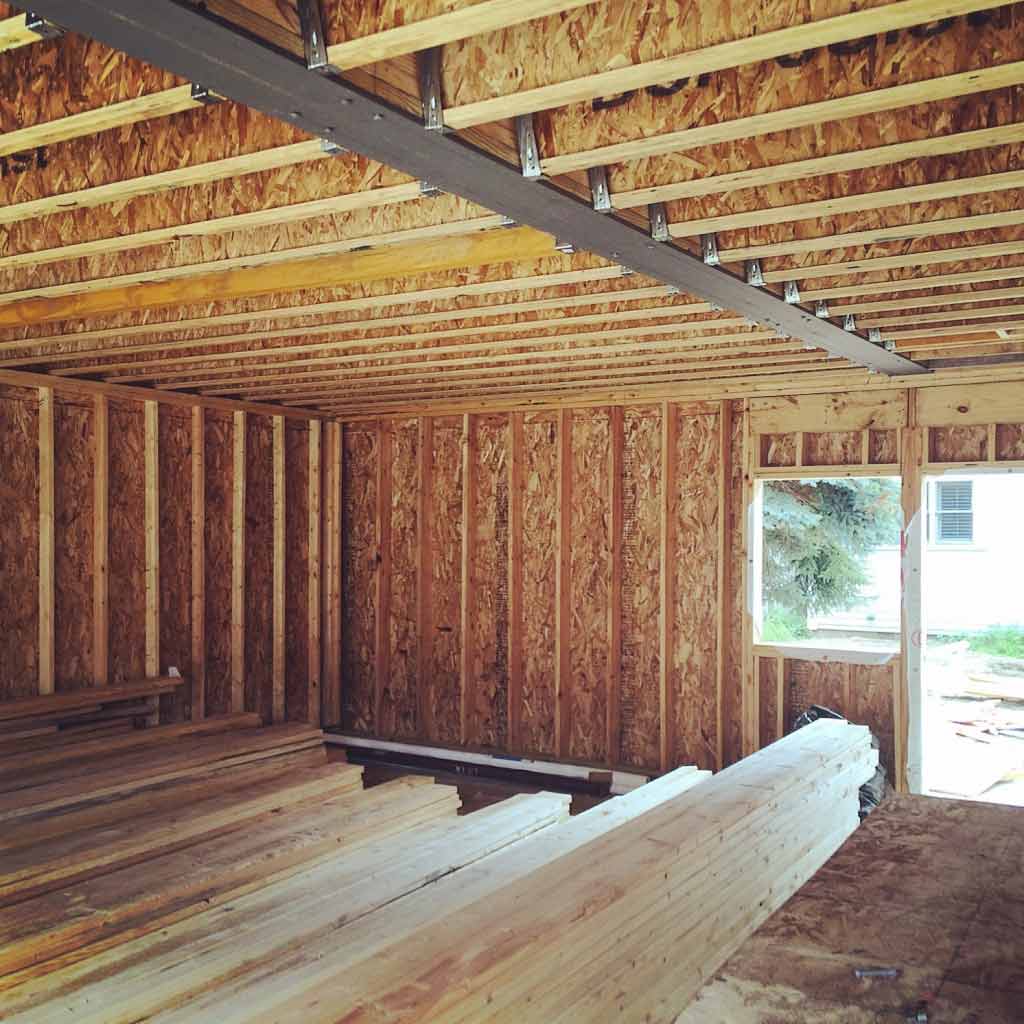 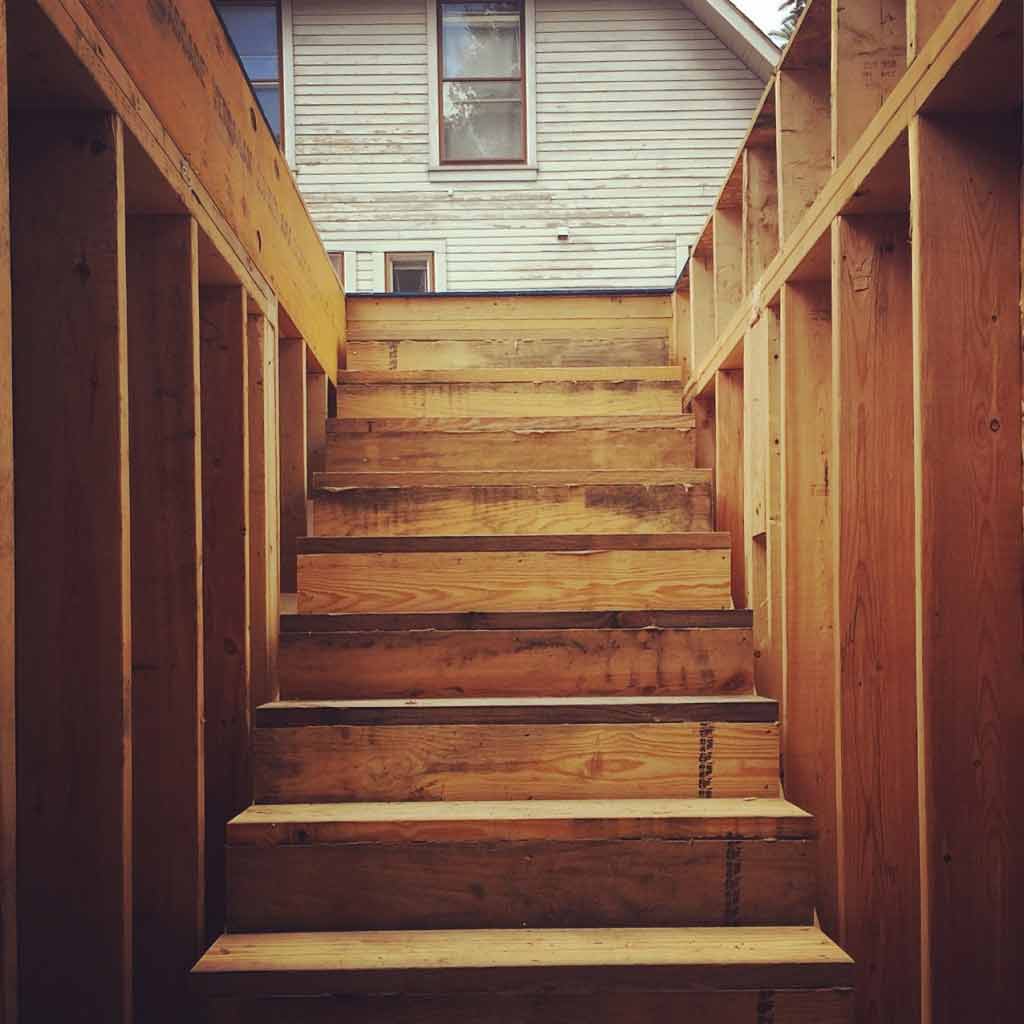 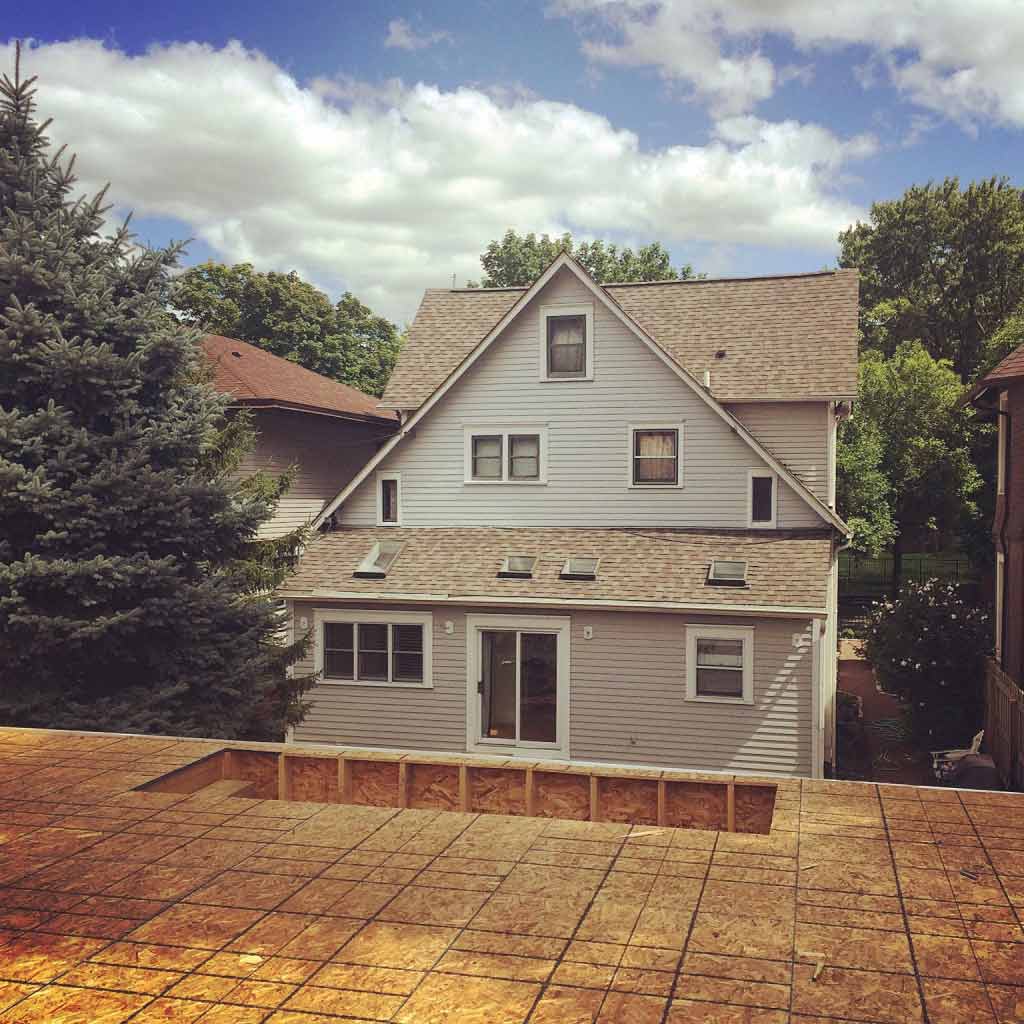 Owner noticed that the bedroom valley was so low they couldn’t fit furniture in the room comfortably.  Initially they questioned the design.  But on site review, we discovered several discrepancies between the design and actual construction.  Mainly, the rafter/valley plates and ridge were significantly lower than drawings indicated.  In addition, the loft floor platform was 12″ lower than designed.

In the images below, if one compares the original “as-built” photo directly below to the rendering underneath, one will notice the disparities in roof pitch, height, and proportions.  The overall structure height was off by more than 3-feet.  Most certainly, these discrepancies affected everything (proportions, details, continuity with primary structure, functionality, architect’s mood). 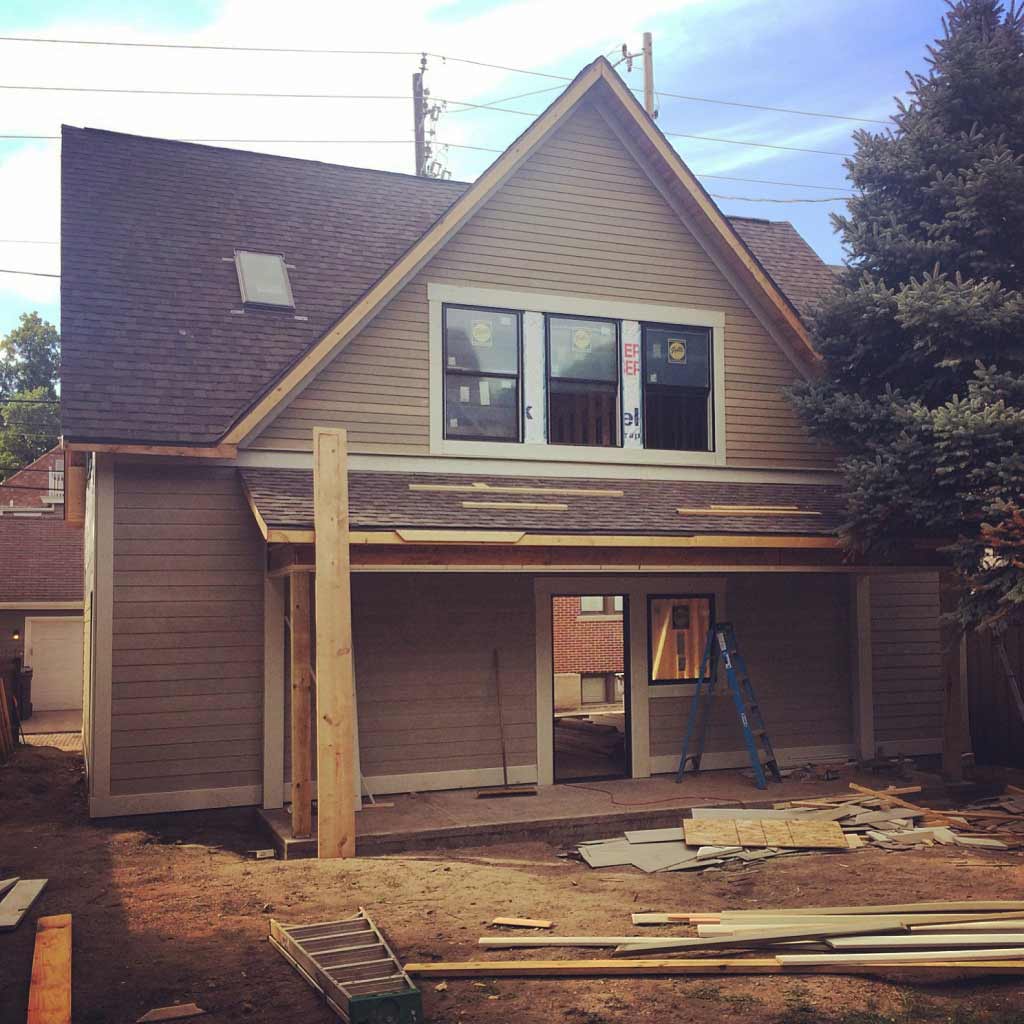 So, upon review with framer and general contractor, it was agreed we would be reworking the entire roof structure, some windows, but leave the loft floor height as-framed.  Photo below shows initial demolition/rework progress after roof structure removed.  Framer did a few mock-ups to finalize the heights and after a few more meetings, we agreed on final directions, including a few variances from original intent.  The fact that we got to redo the critical areas was a win, but ideally we would have avoided any rework at all.

Overall, roof ridge was originally framed 30″ lower from loft deck than noted, and roof rafter plates were built about 12-inches lower than Drawings indicated.  These details were spelled-out on the Drawings, and they mattered from a detail/proportion/historic preservation standpoint.  It mattered to the Owner that the space could not function as intended due to the initial construction variances.  If not for the functional issue, aesthetic issues alone may not have been enough to require the changes, despite the historic preservation commission territory.  It mattered that we respect and match existing primary house roof pitches and details as closely as possible – as designed and detailed.

Image below is process of deconstruction and working through resolution and an acceptable compromise to get it close. 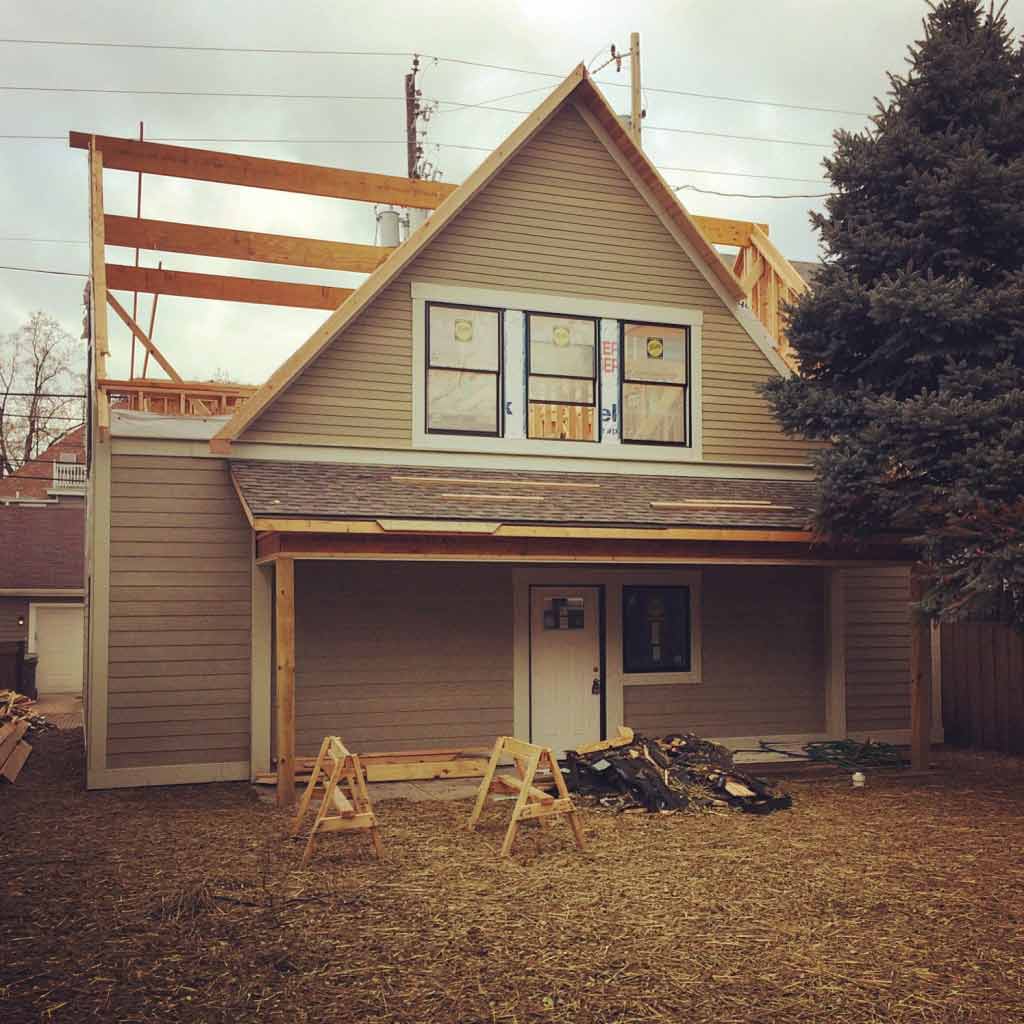 Here below is the alley side initial progress.  At this point we noticed that the windows were not symmetrical with the garage doors – things were off here and there.  Also, the plate height for the shed dormer was too low and didn’t allow trims as detailed.  Fascias and soffits were incorrect.  Eave vents were missing.

For the eave details, instead of installing tongue and groove roof sheathing per drawings, framers installed OSB to edge of gutter boards.  Framer said they planned to sheath between rafter tails.  That may be fine, but it’s not what we detailed.  Also, build team was installing siding without the rainscreen channel detail.  Instead, they installed siding directly over WRB (weather resistive barrier).  This may be fine, but rainscreen channels as designed are more resilient and allow better weeping and drying behind siding.  Generally, team installed siding correctly including flashing at butt joints.  However, the siding/trims touch the z-flashings, which isn’t ideal.  Also, team didn’t install flashed blocks for the exterior carriage lights as designed. 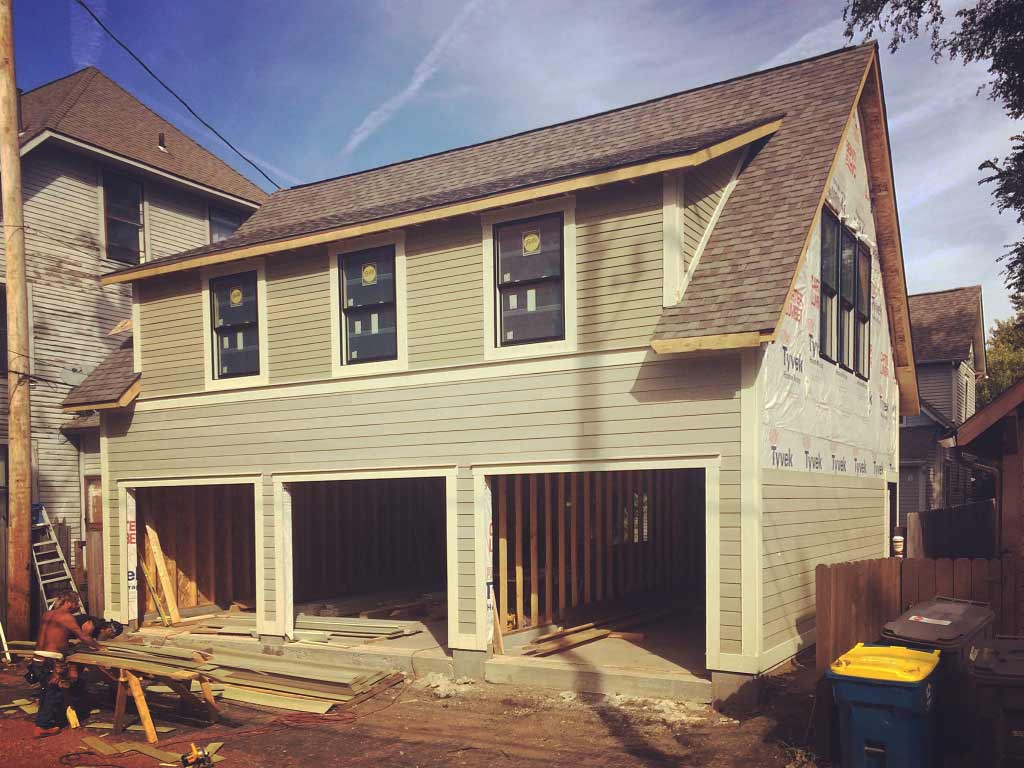 This is a better view illustrates that the windows are not equally spaced over the garage doors.  Center window is not centered over center garage door as designed.  Build team has agreed to fix these issues. 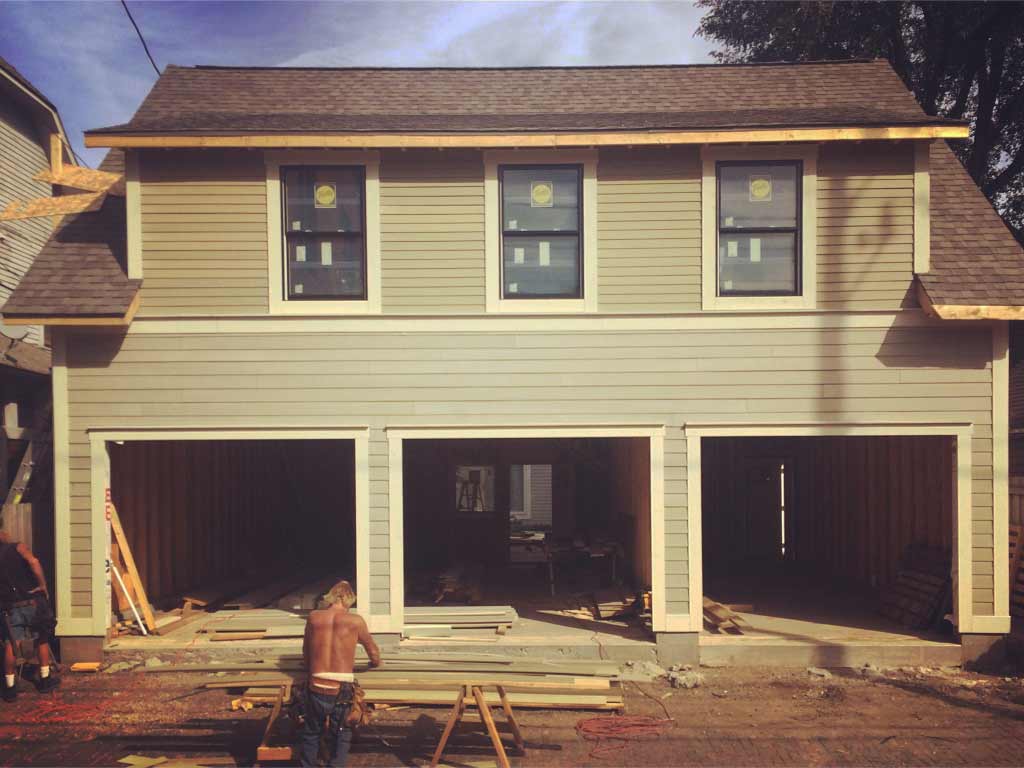 Photo below shows original view low valley framing interrupting the bedroom functionality.  This valley when corrected will be significantly higher.  Ultimately, framers did raise the roof to a functional level, but still not as per original Drawing details.  They worked a compromise based on the difficulty and costs of such a major rework.  In reviewing the framing issues with general contractor and framer, it became apparent that the general contractor was not supervising the framing crews.  Also, the methods framer used to calculate rafter rise-run was contrary to actually achieving the desired rise-run per drawings.  For this reason, we believe it’s important to always note actual elevation heights of ridge beams, which we did on this project. 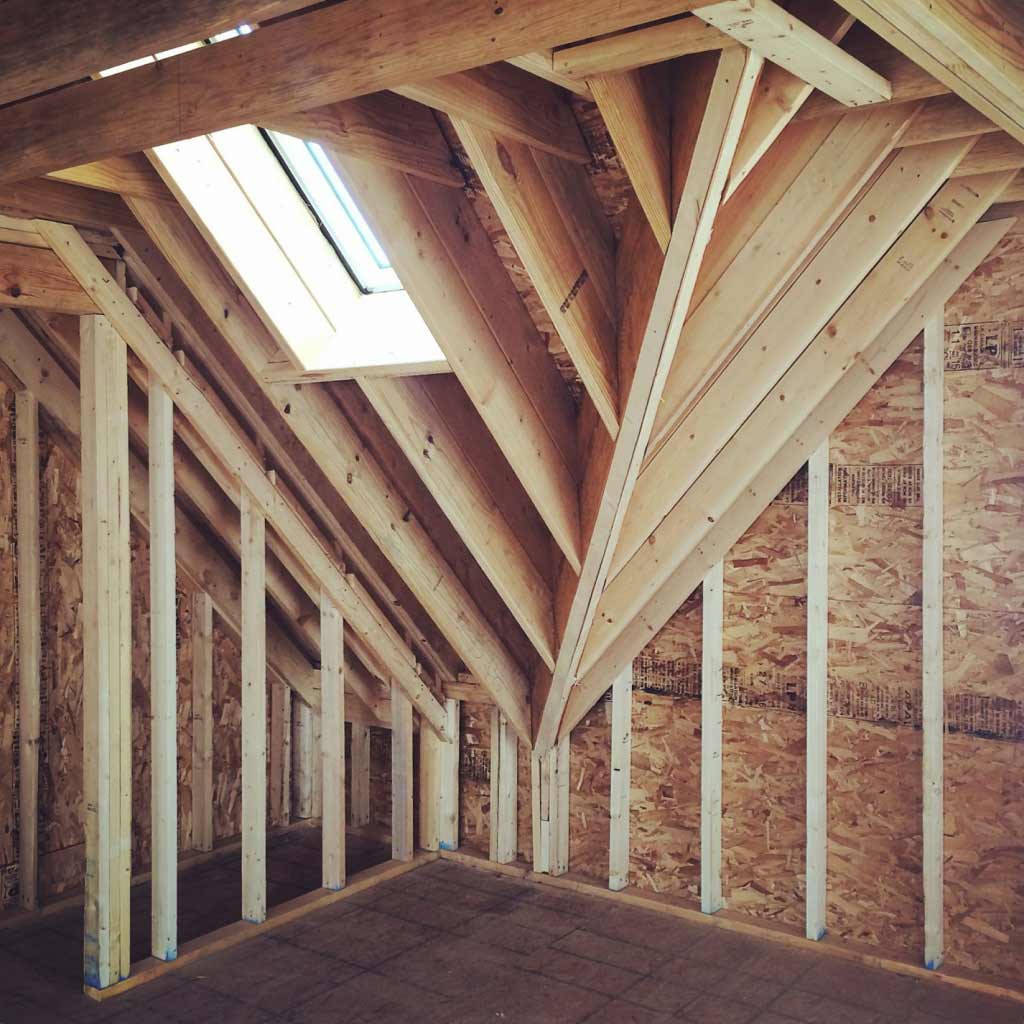 In the photo below, the shed dormer and ceiling framing was much lower than the architectural drawings specified.  Framers did not follow the architectural details, which called-out all bearing heights.  Contractor has agreed to rework the entire roof structure at contractor/framer expense. 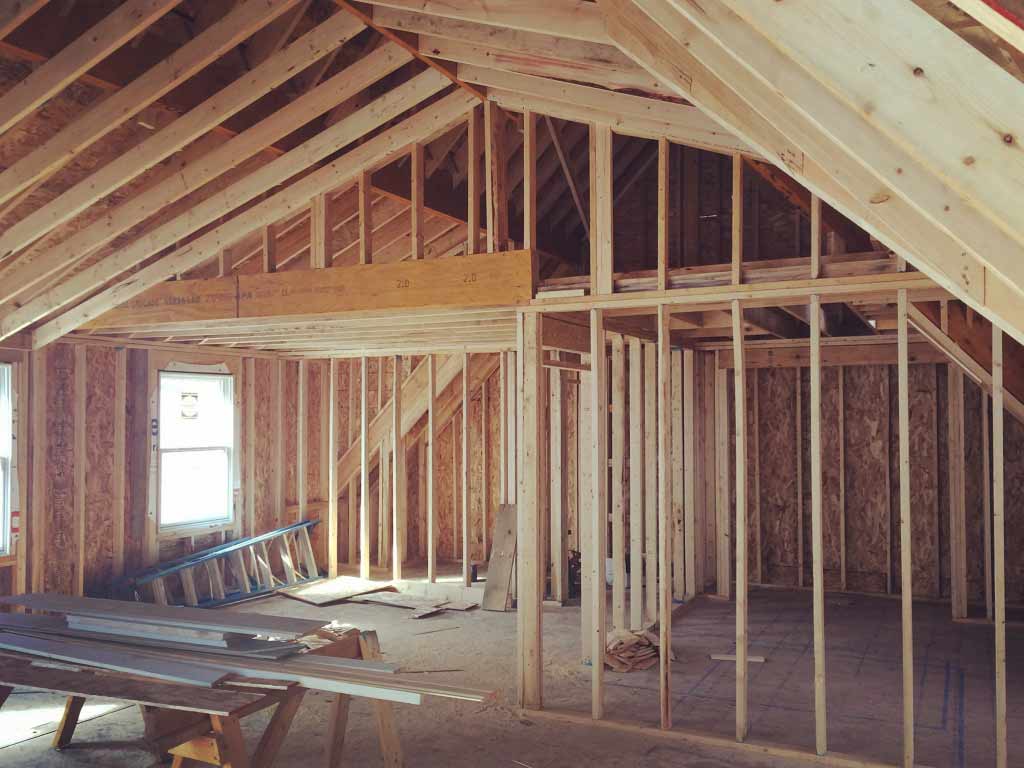 Image below shows the rework progress of same valley.  Valley beam location was important because of the detailed fascia/gutterboard detail.  These trims were missing in the initial effort, as lower bearing heights didn’t allow room for exterior trims. 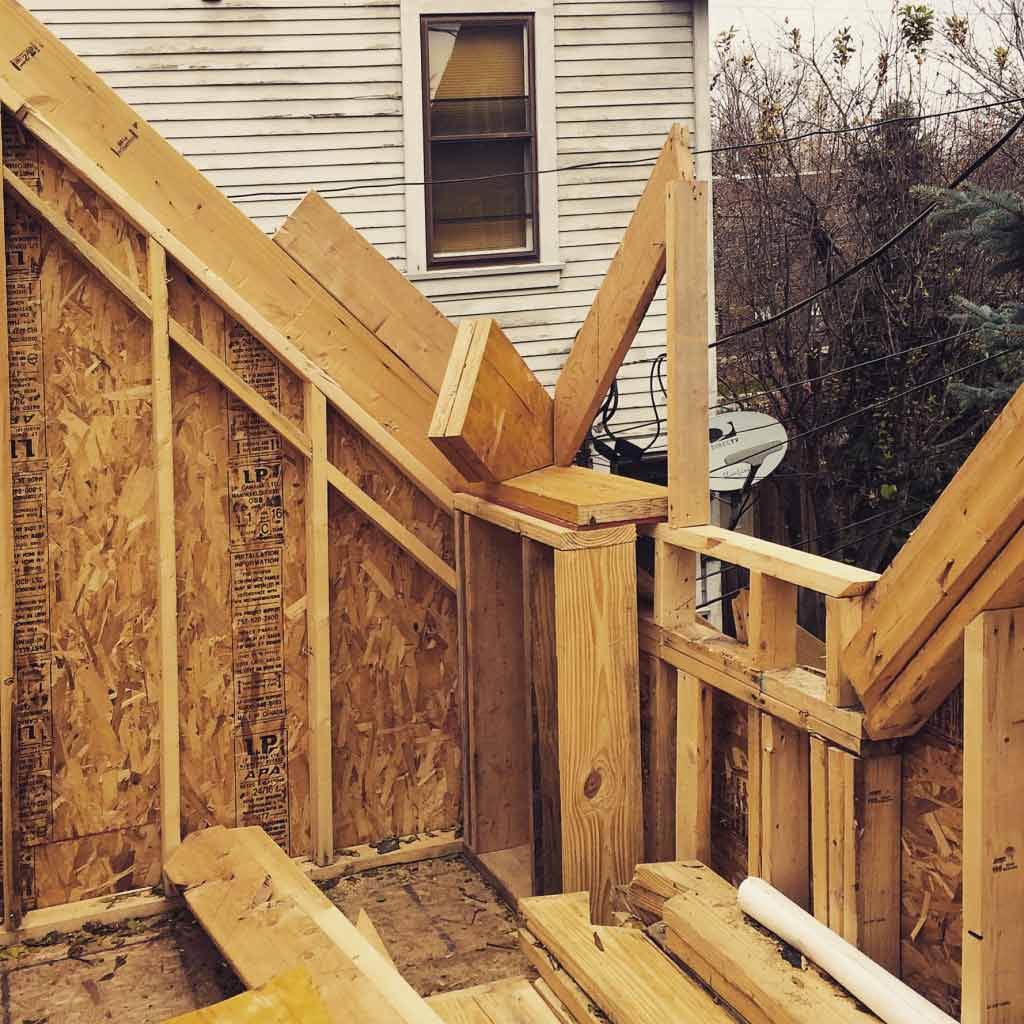 This is a process photo of reworking the roof, including raising the shed dormer.  Contractor had yet to adjust the windows in this photo. 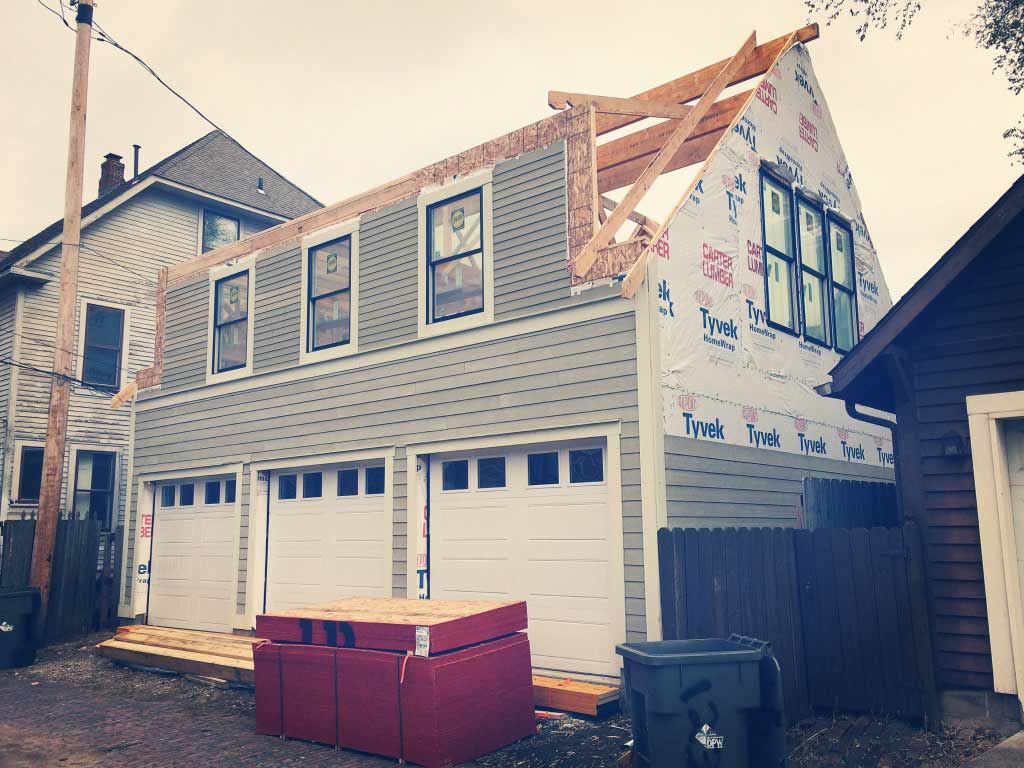 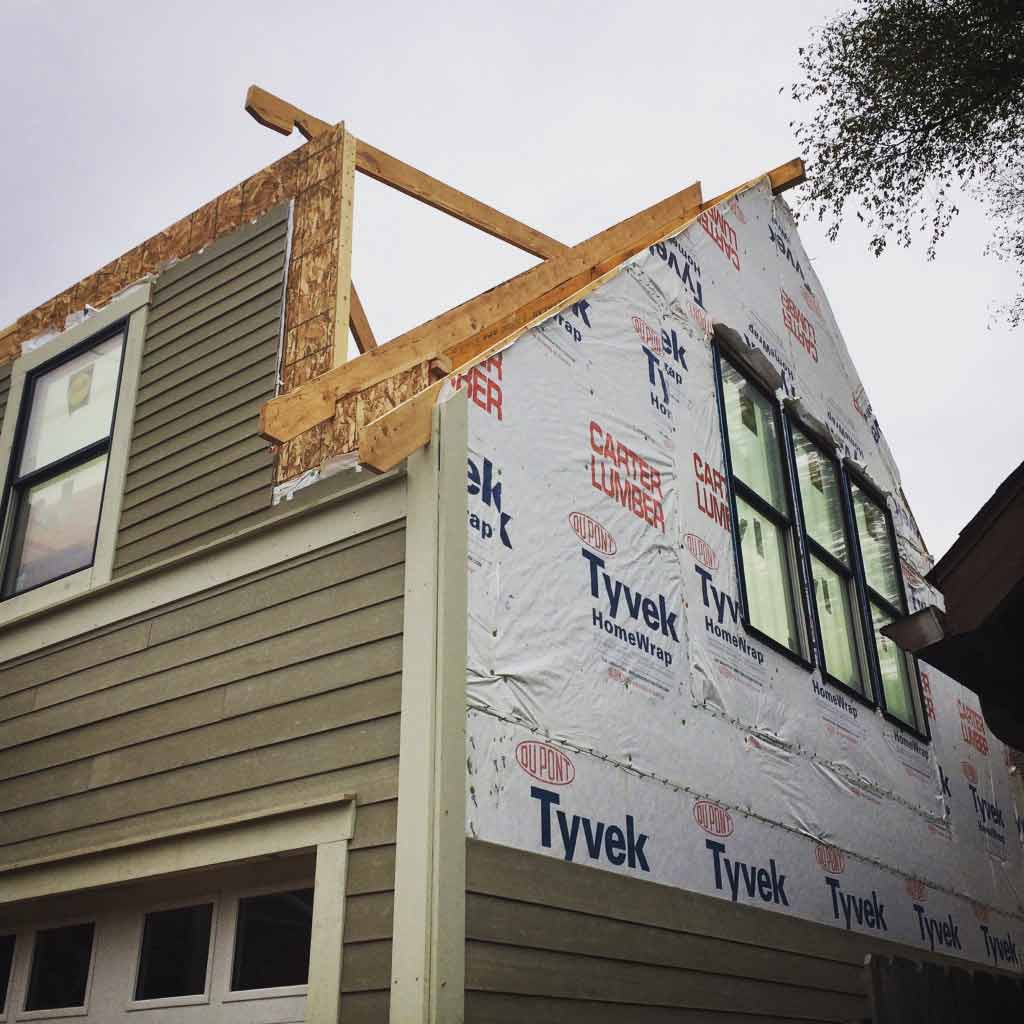 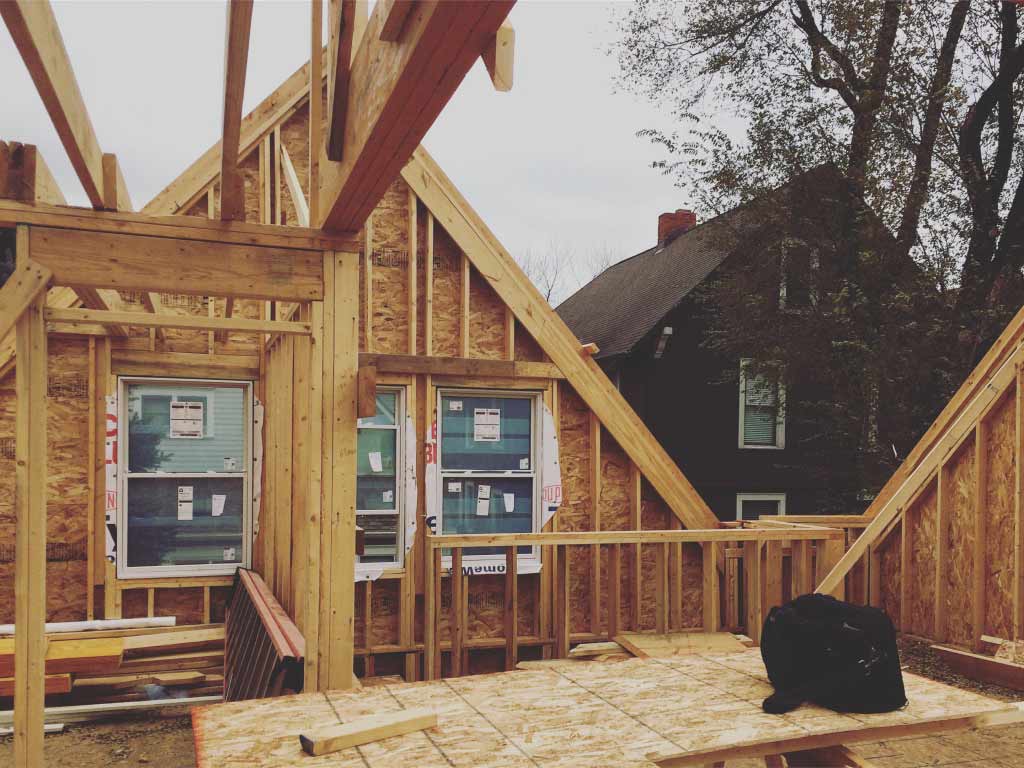 Eave Details Not Per Architect Drawings

Here in the porch roof overhang, instead of installing 1x tongue and groove roof sheathing boards, they extended OSB and intended to fur down and infill T/G boards between each rafter.  This would not be as good of a look and not as detailed.  We understand that contractor will also correct the eave details. 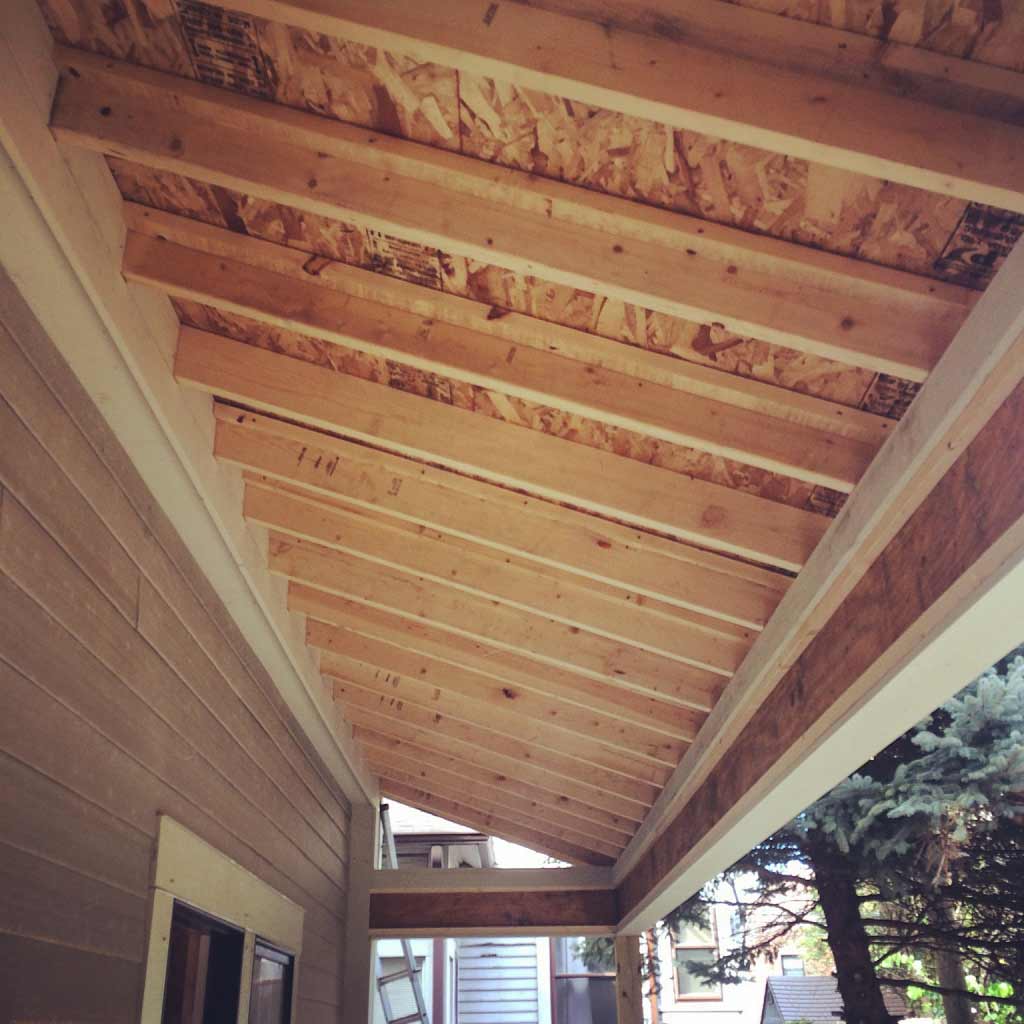 It is obvious to us as Architects who do this every day, but we need to remember to always stress to our clients the importance of Architect involvement during construction.  Construction Administration is a very important stage of the Architect’s professional services that gets ignored frequently in the residential market.  If you cared enough about design quality to hire a good architect, then you probably also care that the project is built to the architect’s specifications, no?

It’s very important for architect to verify that contractors are achieving the design-intent expressed in the construction documents.  Also, it’s important to be available to answer questions along the way.  There are many things that can and do go wrong, and over-communication is the best recipe for success.  Nobody is perfect, including us.  Mistakes are not intentional, just the nature of the business.

Good communication helps fill the gaps.  This takes time and effort, which relates directly to budgets and timelines.  It’s important up-front to identify what is important and how to go about achieving the primary project goals.

As a way to prevent miscommunication issues from happening, we had offered our Architect-led Construction Management Services via our company, WERK | Building Modern so we would be involved daily for direct collaboration with trades.  When Owner elected to proceed with another general contractor, we failed to stay involved as architect-consultant and stress to our clients the importance of periodic site visits to oversee progress and make sure the trades understood all the details.

Luckily, we have had the opportunity to advise on corrections, and hope to help achieve a successful outcome in the end.  With more Architect involvement during construction, you will likely save time and money in the process.

Please check back as we will be adding to the story – hoping for a happy ending!