G BLOC Modern Live + Work is a new development in Broad Ripple North Village that includes a mix of commercial office, urban residential lofts, and covered parking.  It is located on a small city block at 841 E 64th Street.We enjoyed the public process that began in early 2016 and worked toward a solution that most effectively meets the multifaceted urban design goals of this excellent location.  It was an engaging and stimulating dialogue with the neighborhood and the City in an effort to balance the desire for pedestrian engagement and more mixed-use density fitting Broad Ripple’s Envision Plan while also managing flood-plain requirements.

The location (formerly 6367 and 6371 Guilford) is just a few feet from the Monon Trail and borders Guilford, 64th, Cornell, and Main.

From where did the name, G BLOC, originate?

We initially gravitated to the name, ‘G BLOCK’, because it was a small city block with properties fronting Guilford Avenue.  Later as the development concept evolved into mixed-use, including a co-working component, we changed the spelling of “Block” to “BLOC”, in the spirit of creating a supportive environment of collaborators.

BLOC = a combination of groups sharing a common purpose, acting together in mutual support. 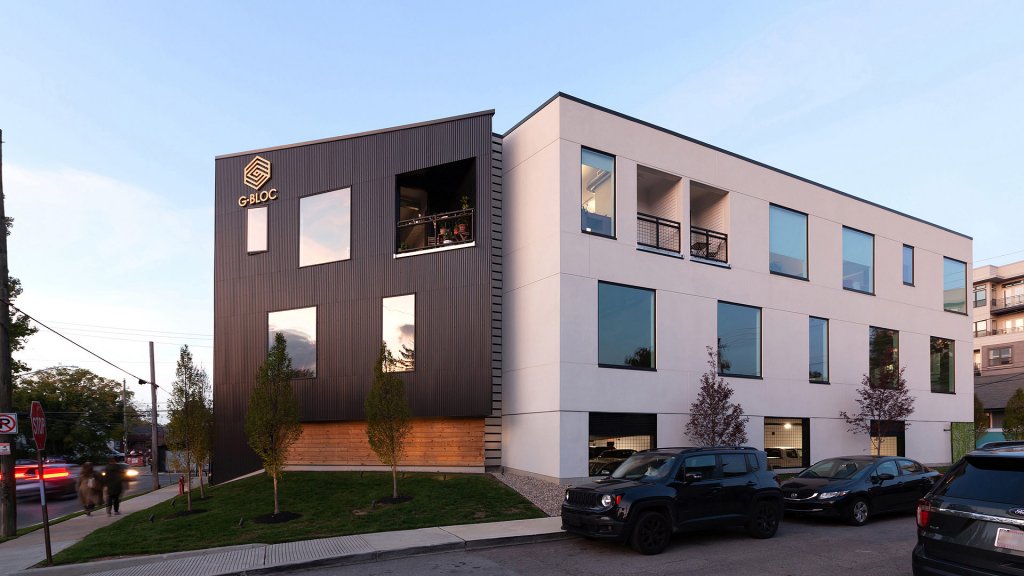 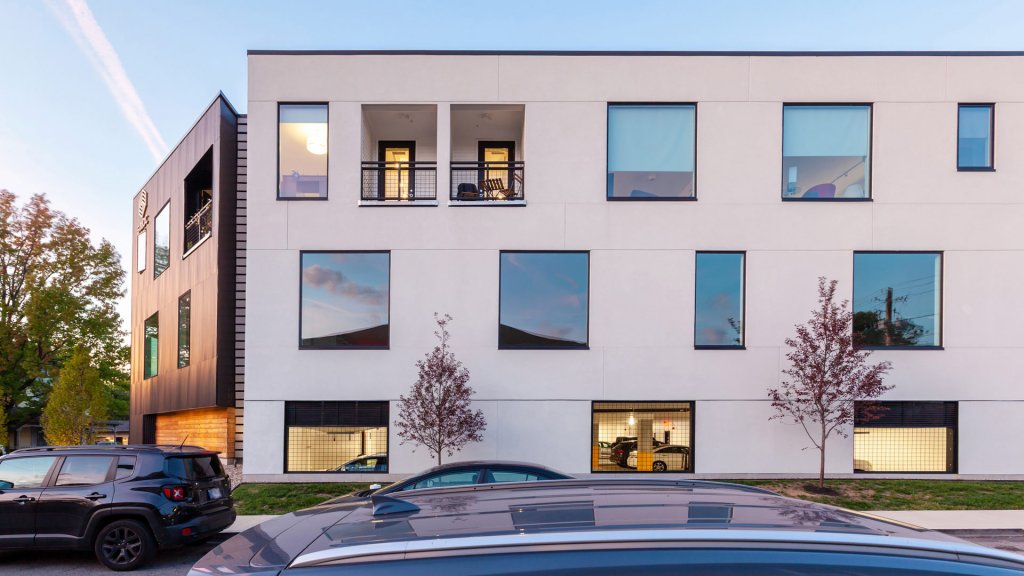 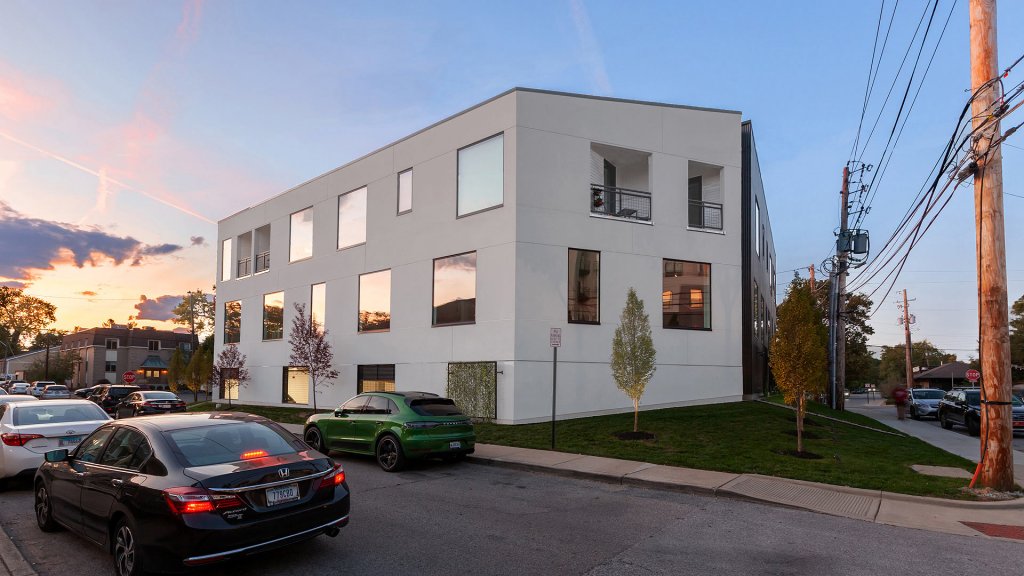 2014-2015 – We most recently became interested in the Broad Ripple North Village area while working with one of our clients to design and build a new brownstone-inspired home on Ferguson Street.  This particular client lives in an exclusive gated community in Carmel, and were about to become empty-nesters.  For that reason, they wanted to live in a vibrant, walkable community with lots of amenities and restaurants, and acquired property to make that happen.  Some immediate plans changed for that project and it went on-hold, but it’s still out there and we are looking forward to a re-engagement.

2016 – We gained control of the properties at 6367 and 6371 Guilford, and began conceptualizing development options.  Our first BRVA Land-Use and Development Committee meeting was in March 2016 to introduce initial ideas to the BRVA Zoning and Land-Use Committee to begin a constructive dialogue and gather information.  This scheme included 30 loft apartments on levels 3 and 4, office space on level 2, and primarily parking on level 1.

BRVA was good about communicating their concerns (parking should be out of sight but enough provided possibly to exceed the zoning requirement, pedestrian engagement is very important, please include a retail component, we don’t really want to knock-down the historic homes on the site, how tall is it, and we’re not sure we like your design quite yet).  This was a good introduction to community stakeholders, and we went to work from there to respond to the mostly constructive feedback that we received.

Our next round of development focused on concealing the base-level parking and integrating a ground-level retail component per BRVA request.  We also had time to develop the architectural concepts a bit more.  We could see that parking may be the biggest challenge in enabling enough density for project feasibility.  This next concept incorporated a mix of two-story townhomes (possibly live-work), a reduced number of loft apartments, office, small retail or cafe, and parking.

BRVA still appeared to have strong opposition to the proposal.  For instance they suggested still not enough pedestrian engagement, too massive, don’t want to demolish existing structures, and concerns with parking.  Also, BRVA did not appear to consider the significant challenge that the flood-fringe factor will play.  On our side, we knew that satisfying everyone was going to a monumental challenge, especially if we counted ourselves and financial feasibility.

Architecturally, we began to define what the building should be (in our eyes).  BRVA did not agree (“it’s too boxy”  “too modern”, “too tall”, “not enough pedestrian engagement”, live-work will never work”).  The sites were in zone C-4, which allows up to 65-foot height; however, we proposed to rezone to the new MU-2 Category per Indy ReZone, adopted in April 2016.  MU-2 allows up to 35′ in height, but BRVA Envision plan recommends up to 4-stories and 40-feet.

We ended-up taking a break in summer 2016, and then came back to BRVA in November.  We had refined the concepts some, but no major differences from the prior meeting.  Some on the BRVA were hoping for more significant design concept revisions.   This was our 4th trip to see the land-use committee.  From here, we engaged zoning consultants and submitted our applications with the City (late 2016-early 2017).

2017 – Planning staff opposed the development proposal (“too intense for its location”, “parking concerns”).  After several meetings, it became clear that staff was not going to support the rezone or variance.  Our only chance was to do what was necessary to achieve BRVA support and proceed with the City process.  We didn’t expect hearing officer to contradict staff, so we looked forward to Board of Zoning Appeals hearing.

So, we went “back to the drawing board” again to see how we could create a more “village-friendly” architecture.  We redesigned the exterior for a more “village-friendly” character and scale.  In addition to adding gabled roofs, we deleted the 4th floor and raised the main floor to accommodate more storefront.  With these changes, BRVA voted to support the project, but only with a long-list of agreed stipulations.

Thank you to Colleen Fanning, Thomas Healy, and other local business owners for your support, including writing letters and speaking on behalf of our rezoning efforts.

Planning Department + Board of Zoning Appeals

We were not able to achieve City Planning Department staff or hearing officer support as of 08.10.17.  On 09.06.17, the Board of Zoning Appeals Commission voted to support the rezone from C-4 to MU-2 (5-3 vote).  However, they voted against the variances (building height + clear sight triangle) (3-5 vote).  On the bright-side, City did not adopt BRVA stipulations since they did not approve variances.  In hindsight, this may have been the most beneficial outcome for this development.

We still really don’t understand why staff was against our proposal.  Above all, we understood a primary intent of Indy ReZone was to encourage higher-density development in urban areas, discouraging sprawl.  The resistance to an additional 5-feet of building height and maintaining clear site triangle is dumbfounding (to us) at best.  We documented 40-50 instances in the immediate area that don’t follow current clear sight requirements.  And City has approved several new development proposals much greater height, including 70-feet directly across the Monon Trail.  The clear-site triangle requirement is automobile-centric, which is contrary to initiatives focused on the pedestrian.  Each of the intersections abutting our property have all-way stops; therefore, there is no need for strict adherence to clear sight triangle.  Its adherence seems in conflict with the creation of a nicely-scaled pedestrian experience.

Despite our initial claims to the contrary, neither BRVA or Planning Department appreciated the significant hardship for developing the site.  This hardship pertained to the flood plain and associated FEMA requirements.  On the technical design side, this was all a fascinating challenge.  On the development side, it was a major hurdle and hardship on most levels.  Certain members of the Board of Zoning Appeals tried to coax us to highlight the flood zone hardships more-so.  Without a doubt, we didn’t emphasize that issue to our advantage in the variance hearing.    We’ll be sharing more about the what we learned during this process, so please check-back for updates.

We presented the gable-roof design below to City + Board of Zoning Appeals.

Since achieving the rezone, we have developed a completely new design concept (again).  This new direction meets the now-defined zoning criteria, including the clear-site triangle, parking, transparency, and height.  Furthermore, we have designed the scheme to accommodate a future 4th floor.  As we delved deeper into zoning exceptions, we learned to leverage certain components, including skylights, parapets, towers, and surrounding grade.  However, we’ll still need a variance for the future story.

Zoning rules have forced us to adapt and modify some pedestrian-engagement amenities in favor of other requirements.  For instance, height limitations and flood-plain requirements forced us to implement some of our original directions.  In addition to sinking the base level partially into the earth, we moved the primary building entry back to the northeast corner oriented to the Monon Trail.  Despite the numerous challenges, we are excited about the refined direction as the newest design solution is a true contextual response shaped by numerous forces (physical, cultural, political).  As of 12.31.17, we have the newest and final design concepts just about completed.

2018 – During the CD stage, we have made further refinements to the design that we will be sharing soon.

It was a long, drawn-out permit review process, but we finally achieved permits in late summer 2018.

Our civil engineer had advised us to get a head-start on the drainage-review process, as it’s good to cross that bridge early.  Unfortunately, the drainage design process and approvals didn’t go as planned.  Our engineer’s initial design strategy was not accepted by the City, nor was the second.  As the correspondence on these first two drainage concepts/reviews took a few months, the balance of architectural permit applications were by then also underway and running parallel to drainage review.

One point of contention with the drainage design between engineer and City of Indianapolis was that we were being asked to reduce the preexisting site runoff significantly more than the engineer anticipated.  The design didn’t just have to ensure no additional runoff, but instead, it had to reduce current runoff quantities of the existing site by a significant amount.  So what ended-up being required included significantly more detention volume than anyone on the design team expected.  100% of the new building roof-runoff is detained.  Surrounding site runoff is not detained.

The site is tight, and setbacks minimal.  Earlier designs located stormwater detention piping along the perimeter of the site.  However, with the increased volume requirements, these initial locations would no longer work.  So instead, we decided our best option at that point was to run a detention vault down the middle of the parking garage.  And instead of utilizing composite corrugated vaults, we needed precast concrete vaults to achieve the required volume in such a tight space.

From there, we had to lower footings adjacent to the structure based on the vault depth.  Also, as we were coordinating other permits (sewer, ILP, structural), other related design elements were still in-play.  So there were a number of overlapping issues affecting the permitting process, with multiple levels of review, but eventually we made it through.  However, the permit approval process took about 4-5 months longer than we anticipated, pushing us into cold weather conditions to start the actual construction. 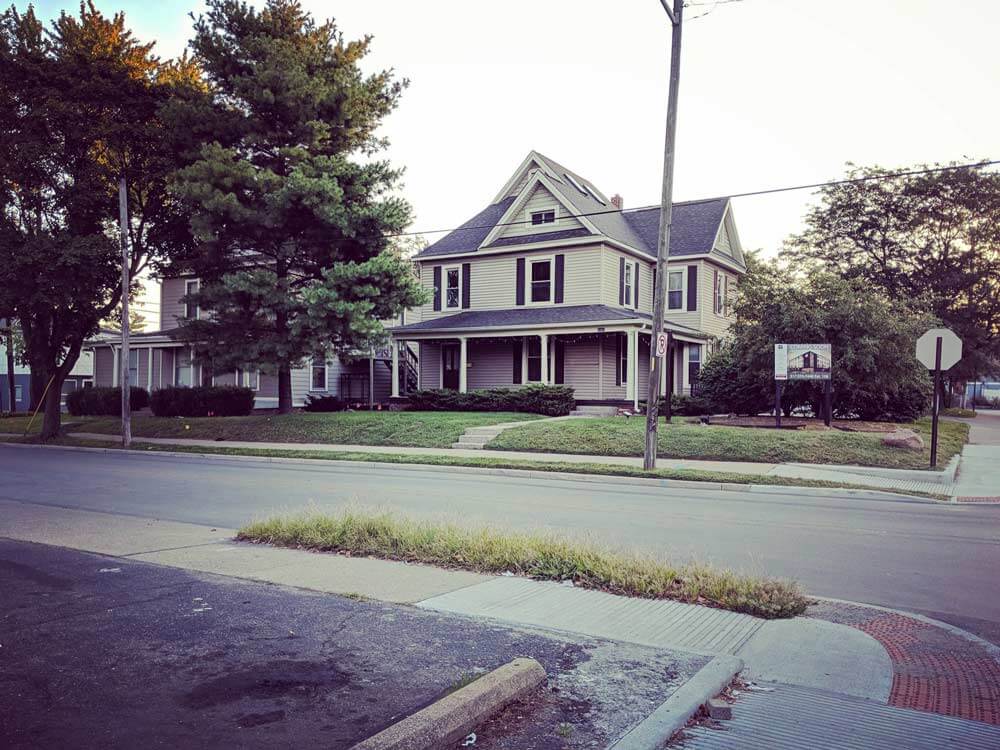 Here, we are beginning site layout , excavation, and reinforcing.  Based on contractor availability, we weren’t able to begin footing work until December 2018.

Since our footings were going to remain open through winter, we decided it best to pour thick grade footings to weather winter freeze conditions.

The footing sequence was slowed by cold weather, as each round of excavation, inspection, and placement had to occur daily so the bottom of excavations wouldn’t freeze if left-open overnight.  So the footing progress was segmented in that fashion, with one day’s placement followed by the next, with reinforcing tie-ins from one sequence to the next.  And of course, we needed to blanket the concrete for cold-weather cure.

During elevator pit excavation, we began to encounter some degree of groundwater or seepage from surrounding soils.  To offset, we dug deeper, verified soils compaction, and then poured a lean-mix of concrete to stabilize the base.  Soon thereafter, we reinforced and placed the designed pad and walls.

Late January/early February is not the best time to start concrete masonry work, but that was next in-line, so we plowed forward nonetheless.  Here below we can see some initial mobilization and subsequent stair tower progress.

While site masonry work was underway, steel fabrication was in-progress in the steel shop.  CMU and steel had to interface in sequencing, which created some degree of scheduling complexity. 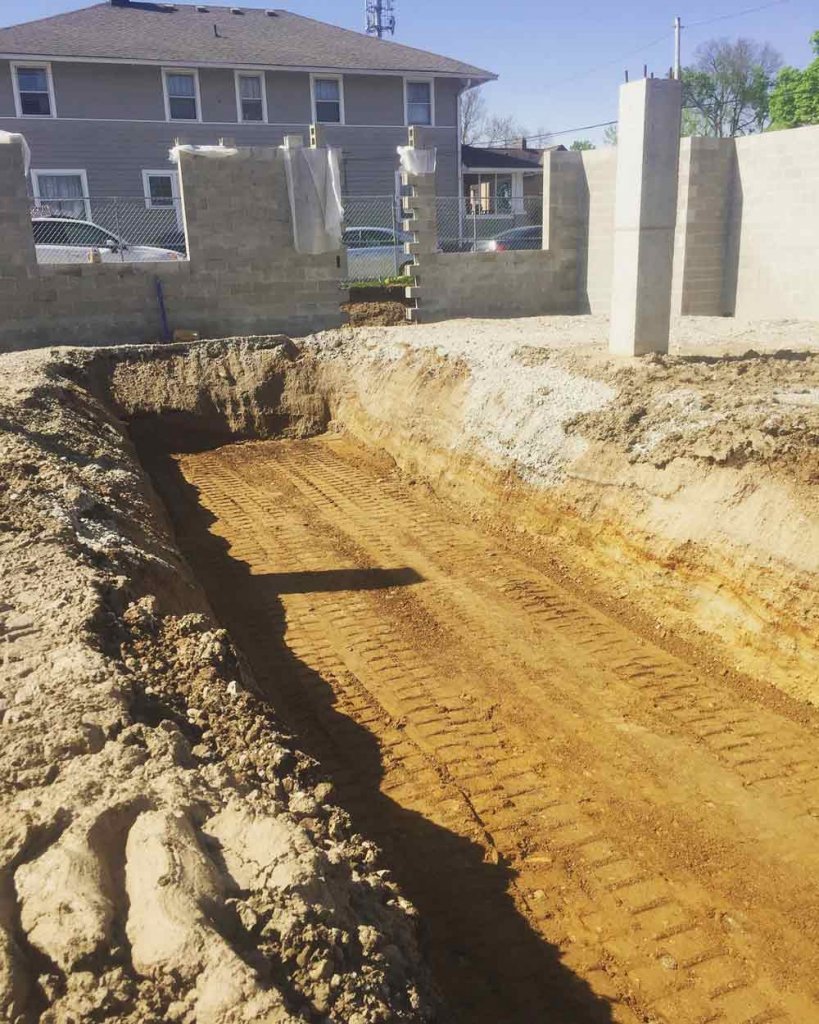 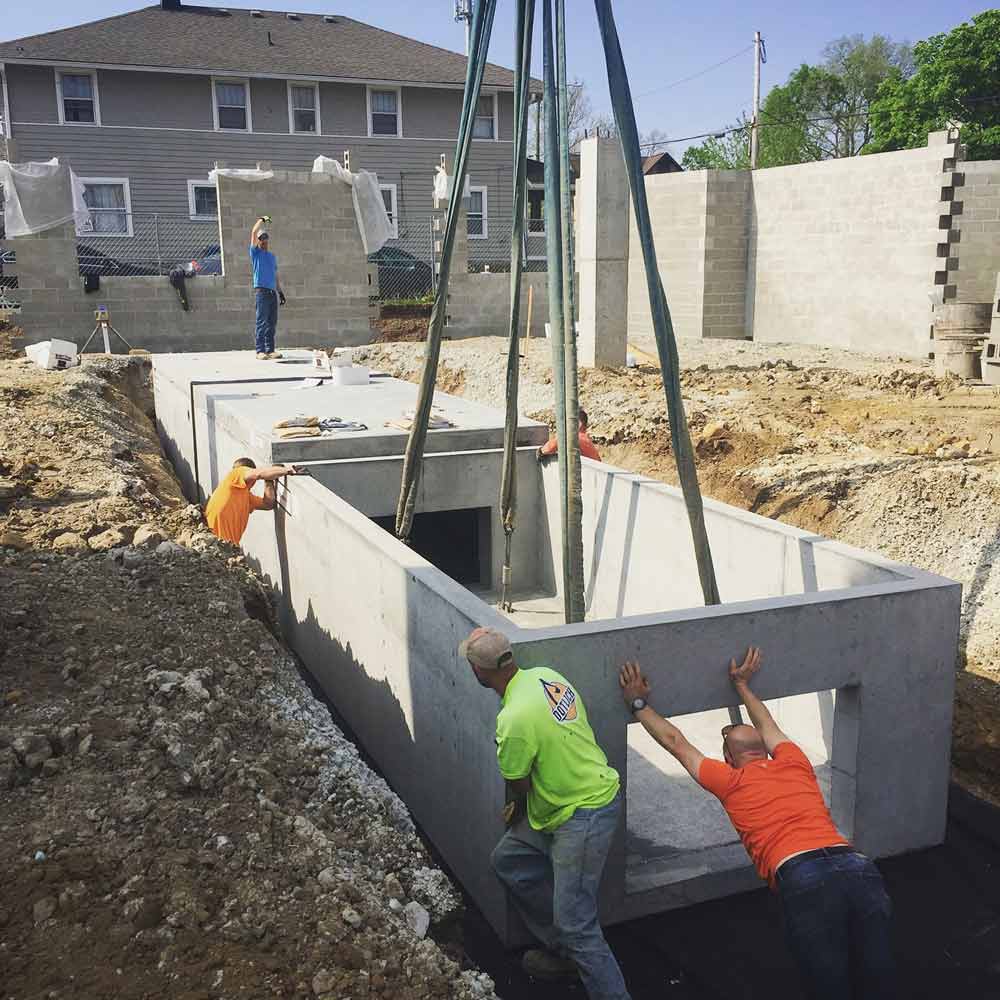 We will fill-in the time gap here when we are able, so please be sure to check back for the updates!

Please check back for updates, as we’ll be keeping this post up-to-date!